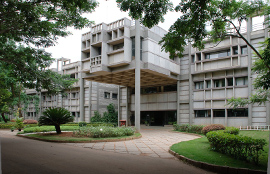 The following projects are available for students with fellowships. Please contact the respective faculty members for further details.

Our group is investigating how arteries in the brain are built—what are the underlying cellular and molecular mechanisms. A subset of these brain arteries is responsible for protection against deadly conditions like stroke. Identifying molecules/physiological conditions which drive their remodeling is of high clinical significance. Using this information, we hope to induce these life-saving arteries in the heart, which unlike brain doesn’t make them naturally and hence is prone to tissue damages from coronary occlusions. The candidate will receive hands-on training on mouse colony management, animal micro-surgeries, whole organ immunostaining, confocal imaging and single cell RNA sequencing data analyses."

Our lab works on fundamental aspects of host-pathogen interactions during infection with M. tuberculosis, often labelled as the 'most successful pathogen' and the causative agent of the disease tuberculosis. Over one-third of the global population is thought to be infected with the bacterium, yet about 5-10% of these infected people get the disease. What makes this pathogen so successful? Why only 5-10% of infected people get the disease? Where and how are the bacteria hiding in the other cases? If they are not causing the disease, why are we not able to get rid of them? What triggers the onset of the disease? These are some of the fundamental questions we are trying to address. To address these questions, we employ a variety of techniques, including but not limited to, microscopy and quantitative image analysis, mouse and cell culture infection models, high content chemical screening, epigenetic analysis, and collaborate with different experts both within and outside the country. Collectively, our results are identifying new facets of interactions in the host-pathogen interface, leading to the distinct possibility of this interface serving as hunting grounds for a new generation of drugs that can act against the bacterium.

We have up to two PhD positions in our lab to work on these exciting questions.

1. Investigating the roles of plant DJ1/PARK7/HSP31 family proteins in detoxification of toxic glycated end products
DJ1/PARK7/HSP31 proteins are members of the DJ-1/ThiJ/PfpI superfamily whose functions have been poorly understood so far. These diverse proteins are widely distributed in all kingdoms of life and are often associated with stress response; however, the biochemical mechanisms of only a few have been clearly established. PARK7, a human DJ 1 was the most extensively studied protein in this family that is associated with a large number of neurodegenerative diseases including Parkinson’s disease, Alzheimer and Creutzfeldt-Jakob disease. Recent reports have demonstrated that yeast HSP31, a DJ1 homolog, has glutathione-independent methylglyoxalase activity and suppresses methylglyoxal (MG)-mediated toxicity and ROS levels. We recently demonstrated that ScHSP31 confers dual stress tolerance in plants (Prasad et al., 2017). Unlike yeast and human DJ1 members, plant DJ-1 superfamily proteins are pseudo-dimeric proteins composed of a single polypeptide chain. A. thaliana contains five (DJ1A, DJ1C, DJ1C, DJ1D, DJ1E and DJ1F). We find that Arabidopsis DJ1 homologs namely, DJ1C and DJ1D, offer enhanced H2O2 tolerance in yeast HSP31 mutant, significantly to a higher level than ScHSP31 or human DJ1 complementation (Under revision). We are currently investigating roles of Arabidopsis DJ1F, mis-expression of which leads to early flowering; and DJ1E, that is involved in biotic stress tolerance.

2. Understanding the mechanism of RNA-directed DNA methylation pathway in plants
Gene regulation constitutes the fundamental program that mediates appropriate expression of specific set of genes temporally and spatially throughout the development of an organism. Epigenetics is a powerful layer of this regulation. Histone modifications and DNA methylation are the major epigenetic changes. Aspects of epigenetic regulation in plants are remarkable in several ways. One such novelty is the evolution of DNA dependent RNA Polymerases that generate a large pool of non-coding small silencing RNAs to establish de novo RNA directed DNA methylation (RdDM). This RdDM mediates epigenetic regulation of several genomic loci aiding in transposon inactivation, defense, development and also in genomic stability. We study several players in this regulation, such as, Polymerase IV, a chromatin remodeler named SHH1, CLASSY group of chromatin modifiers, and several Argonaute (AGO) class of effector proteins. We have performed whole genome/ epigenomic studies including but not limited to tissue specific small RNA transcriptome, gene expression status, DNA methylome and histone modifications - H3K4me3, H3K9me2 and H3K27me3, to study these proteins. Global profiles of these exhibit strong multifaceted influence of the RdDM machinery on several epigenetic layers. Our current goals are to understand specific aspects of these regulators in rice.

Neuro-immune modulations in the adult brain

Projects ongoing in the lab investigate three different cell-types in the adult brain in the context of adaptive responses to homeostatic perturbations. The brain cells we study are: a) adult neural stem cells, b) neuron and c) microglia. We probe these cells in vivo using mouse models to understand a) how adult neural stem cells make fate-decisions in response to environmental conditions, b) how neurons respond/adapt to functional perturbations, and c) how microglia replenish themselves in the adult brain to reinstate the homeostatic tissue environment after an injury or infection response. The overall goal is to understand the machinery available within the adult brain-cells to respond to physical or functional perturbations in order to adapt/adopt for reinstatement of homeostatic conditions. Positions are available for students who have their own scholarship.

Structures of protein complexes contribute to our understanding of mechanistic details of biological processes and the roles of these molecular machines in disease. However structures of large protein assemblies are difficult to obtain using any single experimental method. We use computational modeling to determine such structures by combining a variety of experimental data, physical theories, and statistical inference.

We develop integrative modeling methods as well as apply them to characterize chromatin remodeling assemblies and assemblies at cell-cell junctions.

The ideal candidate possesses strong analytical and programming skills and is motivated to apply these skills in the structural biology domain.

Project 2: To understand how glial electrical synapses regulate development, maintenance and functioning of the nervous system.

Centrosomes are composed of centrioles, which are considered identical within metazoan. Some centrosomes acquire critical structures (e.g., rootlet and transition zone) to convert into the ciliary base with diverse functions, a process called “centrosome-to-cilium” conversion. The abnormalities in these structures cause numerous diseases, including cancer and ciliopathies. Yet, we know little about how cilia diversity is achieved from similar centrosomes.

The project aims to challenge the prevailing dogma of “one-centrosome-fits-all-cilia” by conducting quantitatively comparative studies on “centrosome-to-cilium” conversion in distinct cell-types and examine the raised diversity concepts. We will also probe the principles of a few evolutionarily conserved cell-type-specific features.