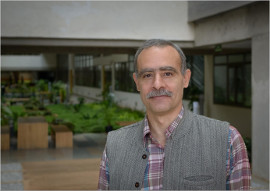 Computational and Experimental approaches to Memory and Plasticity

When we remember things, we activate an extensive array of events in the brain. Sensory input triggers whole-brain activity, which cascades through networks of brain cells. A torrent of electrical and chemical signals is launched in each cell, giving rise to changes in structures and connections between cells.

A key aspect of memory is the ability to relate events that occur in sequences, such as landmarks, music, movements, or words in a sentence. We study how such sequences are formed during learning, how sequences cause changes in cells and connections, and how molecular and electrical signals encode and sustain memories.

We use the new technique of optogenetics to monitor, as well as stimulate, brain cell activity using light. We can literally watch brain activity during learning, to see how sequences in the real world map to sequences in the brain. We replicate such sequences by projecting light patterns onto brain tissue slices, and ask how cells ‘learn’. Because these processes are so intertwined and complex, we use computer models to see how events at many levels of brain function give rise to memory. We have developed a major simulation tool called MOOSE, to build computer models from molecules to networks.