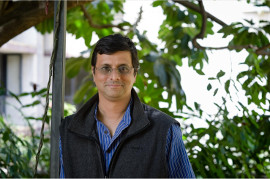 The Physics, Neurobiology and Ecophysiology of Insect Flight

By any measure, insects are the most successful organisms to ever inhabit earth. Arguably, their evolutionary success owes to the fact that they were the first animals to evolve flight and have maintained their mastery over the aerial habitat. Across various scales of size and neural complexity, insects are capable of flying with exquisite speed, control and manoeuvrability. Their wings flap rapidly - often at frequencies of hundreds of wing beats per second - each wing stroke finely controlled by a sensorimotor system that acquires and processes information at similarly rapid rates. Sensory input is acquired by a variety of sensors including visual, olfactory, mechanosensory, hygro and thermosensory etc. and communicated to the central nervous system, which then generates appropriate motor responses in the form of movement of head, legs, wings etc. Thus, to understand the mechanistic details of even the most mundane observations about flying insects (e.g. flies chasing other flies, moths hovering on flowers, dragonflies or hoverflies guarding territories etc.), it is essential to conduct a multi-disciplinary study of the entire chain of events from sensory input to motor output to flight force generation.

My laboratory combines the input from physics, engineering, biomechanics, neurobiology, muscle mechanics and behavioural biology to address diverse flight-related phenomena. To study these questions, we use diverse techniques such as high-speed videography, behavioural measurements, neuroanatomy and neurophysiology.

Specific areas of research in the lab include:Experimental and theoretical study of fluid dynamics of flapping flight.