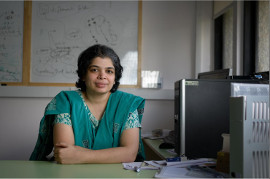 Natural proteins have evolved to fold on a biologically reasonable timescale and to be as stable as is necessary to perform their function. However, selection directly acts only on the functional residues (where function could be binding, catalysis, cellular localization, etc.). These, functional residues cannot be mutated to make protein folding more efficient or protein stability greater. Given the choice of only twenty amino acids at each position, it has become apparent that parts of the protein which function are likely to be the least foldable or stable. Functional regions thus perturb folding from the “ideal” and we use SBMs to understand both what ideal folding is and how functional regions perturb it.

We also use understanding acquired from SBMs to experimentally design and assemble proteins.