Structure and Dynamics of Nucleic Acids

What drives tetramerization in the I-motif?

The I-motif is a four-stranded nucleic acid structure formed from C-rich sequences and consists of two parallel stranded duplexes formed from hemi-protonated cytosines that intercalate (Figure 2). One of the prevailing issues regarding DNA i-motifs has been in understanding why intercalation should occur at all. In a natural DNA i-motif, duplex intercalation results in a remarkably narrow groove that positions two negatively charged DNA backbones extremely close resulting in greater electrostatic repulsion. Sugar-sugar contacts along the backbones of both strands that flank the narrow grooves of the i-motif have been implicated in tetramer stabilization although evidence for the contrary also exists. We have shown that hybrid i-motifs are an excellent platform to probe interactions in the narrow groove. It is the only method that can identify molecular interactions that promote or ‘positive regulate’ i-motif formation. All other methods have identified only destabilisers of i-motifs. Our work has shown that (i) sugar-sugar contacts in i-motifs are not a consequence of, but possibly drive tetramerization (ii) 2’OH steric clash in the narrow groove is not as destabilizing as perceived (iii) i-motif intercalation topology is highly sensitive to narrow groove interactions and (iv) there is a subtle specificity encoded even in the sugar-sugar contacts. 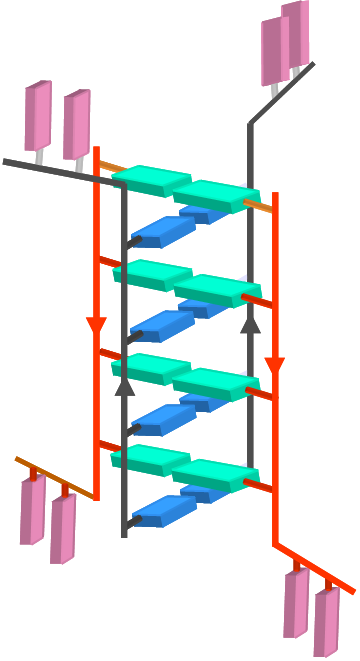 The I-motif as a building block for rigid 1D scaffolds on the nanoscale
Ramya Krishnan and Harshad Ghodke
We have explored the potential of the i-motif as a rigid building block for the construction of 1D scaffolds on the nanoscale. Using a bottom up approach of self assembling C-rich oligonucleotides, we have created 1D wires that are upto 3 microns long and 2 nm wide, formed from extended i-motifs that interlock, which we call I-wires (Figure 3). Their use as 1D scaffolds was demonstrated by immobilizing gold nanoparticles evidenced by TEM and SERS. I-wires showed superior aspect ratios, thermal and surface stabilities to B-DNA illustrating the immense potential of these four-stranded building blocks in structural DNA nanotechnology. We are now investigating the persistence length of I-wires, their conductivity as well as using I-wires for materials applications as scaffolds to make plasmon wave guides.
Collaborators: Professor C. Narayana (JNCASR), Dr Ralf Seidel (TU, Dresden)
Icosahedral DNA nanocapsules by modular assembly
Dhiraj Bhatia, Shabana Mehtab
Nanofabrication via molecular self-assembly has resulted in the formation    of DNA polyhedra, which could function as nanocapsules for targeted delivery of encapsulable entities from solution.  Polyhedra based on platonic solids are most promising as they maximize encapsulation volumes while preserving small pore size. We have thus constructed the most complex DNA-based platonic solid, namely an icosahedron and demonstrated this functional aspect for DNA polyhedra, which involves a step-wise amalgamation of discrete polyhedra by encapsulating gold nanoparticles from solution.
Collaborators: Dr. S S Indi (MCBL, IISc) Dr. Atanu Basu (NIV, Pune) DNA nanomachines are synthetic DNA assemblies that switch between defined molecular conformations upon stimulation by external triggers. Hitherto, the performance of DNA devices has been limited to in vitro applications. Here we report the construction of a DNA nanomachine triggered by protons, called the    I-switch that functions as a FRET-based pH sensor inside living cells. It is an efficient reporter of pH from 5.5 to 7, with high dynamic range between pH 5.8 -7. To demonstrate its ability to function inside living cells we use the I-switch to map spatial and temporal pH changes associated with endosome maturation. Thus the performance of our DNA nanodevices inside living systems illustrates the potential of DNA scaffolds responsive to more complex triggers in sensing, diagnostics and targeted therapies in living systems 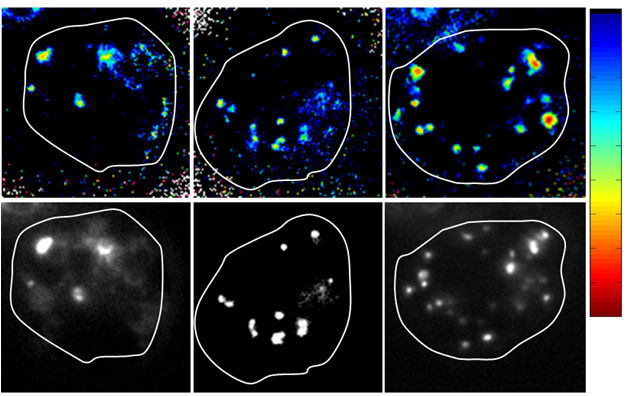 We report a pH-dependent conformational transition in short,defined homopolymeric deoxyadenosines (dA15) from a single helicalstructure with stacked nucleobases at neutral pH to a double-helical,parallel-stranded duplex held together by AH+-H+A base pairsat acidic pH. Using native PAGE, 2D NMR, circular dichroism(CD) and fluorescence spectroscopy, we have characterized thetwo different pH dependent forms of dA15. The pH-triggered transitionbetween the two defined helical forms of dA15 is characterizedby CD and fluorescence. The kinetics of this conformationalswitch is found to occur on a millisecond time scale. This robust,highly reversible, pH-induced transition between the two well-definedstructured states of dA15 represents a new molecular buildingblock for the construction of quick-response, pH-switchablearchitectures in structural DNA nanotechnology.