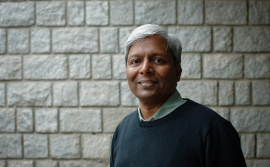 Complex form and traits in animals emerge from sequential recruitment of conceptually simple mechanisms: first, to achieve the overall design during early development; then to fine-tune the details during late development and in response to environmental input. For instance, nearly all animals from worms to humans "start up" using one “operating system,” about 13 master coding regions (the Hox genes) that enforce a hierarchical progression of development. For biologists, the discovery of such a universal module emphatically underscored the likelihood of gaining global insights by studying simple model systems.

Our group focuses on the integrated, sequential development of sensory and locomotory organs of the fruitfly Drosophila melanogaster, in particular muscles, nerves, neural circuits and the behaviours that they enable. At the top of the command chain, we explore how the Hox genes themselves oversee muscle, nerve and behavioural specialisation along the fruitfly body, by introducing the required differences into the near-identical segments of which the fruit-fly body, like ours, is initially composed. Another main approach is to examine later implementations of developmental decisions, both the step-by-step differentiation of individual nerve and muscle cells, and mechanisms used to specify the anatomy and physiology of their wiring in the nervous system. And finally, via work on circuits that underlie motor and olfactory behavior, performed significantly in collaboration with Mani Ramaswami, we seek to reveal global principles of neural circuit homeostasis and plasticity. Our work draws on the tools and concepts of molecular biology, genetics, microscopy and developmental and behavioural biology - whatever is needed to produce a truly holistic understanding of animal sensory and motor systems. In addition, through inStem, our group attempts to use our genetic technologies and biological insight for translational medicine.