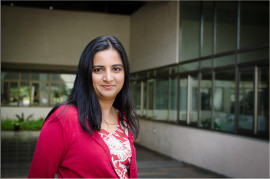 Neural control of movement during development and in adulthood

For most animal species, survival depends critically on the ability to move- be it for feeding, escaping predators or selecting a suitable mate. To generate movement, skeletal muscles need to be contracted in precisely coordinated patterns. Neural circuits control the spatial and temporal pattern of skeletal muscle contractions. Our lab is interested in understanding the hierarchy, mechanisms and development of neural circuits that generate movement.

We use zebrafish, a small fresh water tropical fish endemic to the Ganges, as our model system. The embryonic and larval stages of these fish are transparent allowing for direct visual observation of developing internal organs including the brain. We employ a suite of techniques to tease out the circuitry responsible for generating swimming in developing and more mature zebrafish. We record electrical activity from individual spinal and brain neurons using extracellular and whole-cell patch clamp techniques. We record activity from populations of neurons simultaneously using calcium imaging. We generate transgenic zebrafish to express proteins of interest in particular neurons. This allows us to selectively ablate and also to electrically activate/inactivate specific populations at will. Using these cutting edge tools and technologies, we hope to throw light on the development of neural circuits and the neural basis of locomotion.