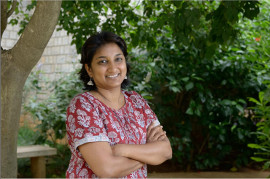 The genetic heritage of South Asia: tracking its history, conserving its future

Just as a good dictionary reveals as much about culture as language, the genome not only defines an organism but also encapsulates its evolutionary journey and circumscribes the future fitness of the species. Once cryptic, these biological lexicons are yielding to ever-more comprehensive methods of genomic analysis, providing almost an embarrassment of riches about the species' history or its destiny. In this group we embrace both outlooks, one goal being the chronicling of human populations in South Asia, the other the conservation of threatened mammals of the Indian subcontinent. More fundamentally, we apply molecular methods in combination with computational techniques that we have developed for the analysis of modern and archival DNA. In our human studies we aim to detail the genetic variation amongst South Asian populations, and to determine when and why it came to be. Are the differences due to meaningful adaptations (e.g. disease resistances) or are they just an accretion of demographics-driven idiosyncrasies (e.g. differing marriage patterns)? In addition to a survey of current populations we are "peering into the past" via ancient DNA, another method we have pioneered. In India, human demographics have of course devastated many of our fellow mammals. Ongoing conservation efforts must be informed by genetic analysis to establish if threatened populations have sufficient heterogeneity for unaided survival, and if not, the appropriate remedial measures. In conjunction with on-the-ground teams around the country we are already supporting conservation projects for tigers, Indian wild cats, leopards and Macaque monkeys, a list that we know can only lengthen.