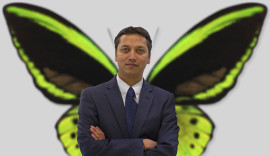 2017/07: Our research paper and work with citizen science was highlighted in a news story in The Telegraph.

2017/02: Our lab and close collaborators are in the news! See coverage in the Hindustan Times, the Indian Express, The Telegraph, India, and EurekAlert.

2015/10-11: The Biodiversity Lab graduated its first PhD student! Shiyu Su, who was co-advised by Krushnamegh Kunte at NCBS and Matthew Lim at the National University of Singapore, defended her PhD thesis in October. She received the degree with a bang – a cover story in the journal Evolution on colour pattern evolution and mimetic resemblance in butterflies! Shiyu, congratulations on the cool story, and best luck with the future work!! See popular science coverage of Shiyu's paper in PhysOrg, EurekAlert, The Hindu, The Statesman, and NCBS News, among others.

2015/06: We described a new species of butterfly, Hypolycaena narada, from Arunachal Pradesh. Read the original research paper, a press release about this discovery, or its popular science coverage in The Hindu, The Telegraph, National Geographic Traveller India and Times of India, among many others.

2015/04: We described, with Kiran C.G. and Kalesh S., a new species of damselfly, Protosticta ponmudiensis, from Kerala. Our first new species, we are excited! Read the news story in the New Indian Express, or the original paper.

2015/03/15: The Hindu reported that a butterfly species, the Green-banded Peacock (Papilio palinurus), has been reported in India for the first time, adding to the already rich butterfly fauna of the country. Biodiversity Lab helped make the discovery.

2014/07/30: The Deccan Herald newspaper published a news story on the decline of butterfly populations in the Bengaluru urban area, highlighting our work.

2014/03/06: doublesex is a mimicry supergene, we reported in Nature. Read more about this story, or see popular science coverage of this paper in Nature, Nature India, Science, NCBS News, The Scientist, National Geographic's Phenomena blog, Mongabay, New York Times, The Hindu, and ScienceDaily.

2012/12: Earlier this month some of our lab members participated in the butterfly survey organized by the Travancore Natural History Society at Neyyar and Peppara WLS in southern Kerala. The highlight of the survey was the discovery of Ypthima striata, the very rare and Western Ghats endemic Striated Five-ring butterfly, from Neyyar WLS. The species was previously known only from the Nilgiris, approx. 600 km north of Neyyar. The Hindu featured the butterfly survey and the discovery of Ypthima striata.

2012/03: Forbes India magazine interviewed Krushnamegh Kunte regarding his return to India to take up a faculty position at NCBS.

2012/01/02: Krushnamegh Kunte joined NCBS as a faculty member. The Biodiversity Lab kicks off!