What are we doing here? #1 - Campus rituals & blue moons

Archives at the National Centre for Biological Sciences
What are we doing here?
Monthly discussions on campus histories.
Session 1: Campus rituals and blue moons
Friday, May 27 2022. 5:30 PM - 7:00 PM
Lecture Hall - 1 (Haapus), NCBS
Open to all at inStem, C-CAMP, NCBS, TIGS and anyone else in the neighbourhood!
NCBS turns 31 this year (or 25, or 30, or some other number, depending on whom you speak to and what they are counting)*. And we thought we’ll do something different to understand this space.
‘What are we doing here?’ is a new monthly experiment to spark conversation, to reflect on campus histories, and to see the culture of science: its backstories, intersections with administration, funding, gender, caste, class, politics, culture, privilege, mentoring, and so much more. Our first session will focus on rituals and routine practices that characterize campus life, along with rare events that this campus has seen over the years.
Join us to listen and share! We start with something fun.
Want to contribute ideas ahead of time? Share a ritual or blue moon here:
https://bit.ly/wawdh-1-survey 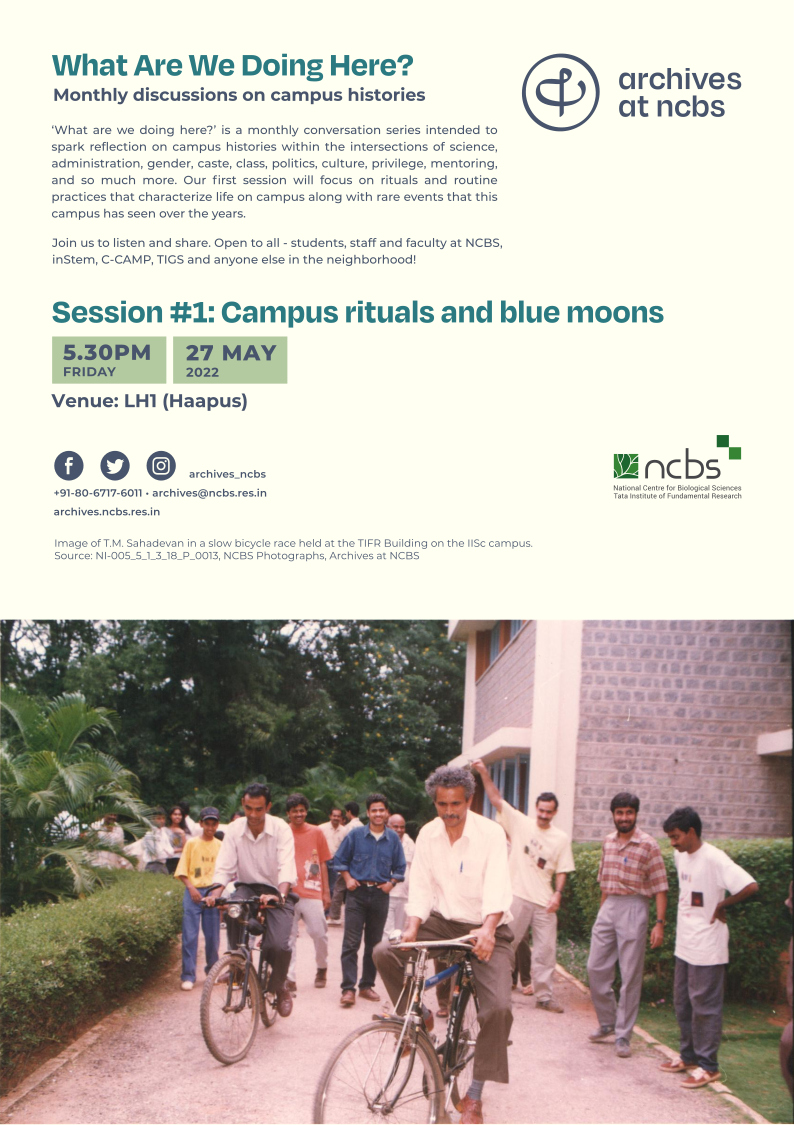 Session 1: Campus rituals and blue moons
Friday, May 27 2022. 5:30 PM - 7:00 PM
Lecture Hall - 1 (Haapus), NCBS
Rituals:
Weekend cricket on the lawn between staff and students used to be a ritual, and might be one again. Anybody have stories around these? Who is a fixture? Who isn’t?
The new GS students chattering on the bus ride to a local diagnostics centre during orientation is a ritual.
What new rituals might emerge from the present? What specific things have been happening around here for months, years, decades?
And how about the blue moons, the rare events**?
Finding Sandeep Krishna on campus for a coffee or a signature is a blue moon event.
TM Sahadevan participating in a slow cycle race in the mid to late 1990s at the TIFR Centre at IISc (NCBS’s first home) was a rarity, maybe even a one-time occurrence.
Ritual blue moons? Fire safety classes are a ritual. Finding a non-security campus member who will show up is a blue moon.
What else do you know of? Past rituals that are rare events? On the way to being rituals again? Past rarities that are commonplace? Feel free to contest.
Who’s hosting this?
The Archives at NCBS. We are a public collecting centre for the history of science in contemporary India (https://archives.ncbs.res.in). We also carry institutional memory. Stop by the ELC basement sometime.
And because emails from the archives should have footnotes:
*Why 30-ish? On Oct 22, 1991, the Department of Atomic Energy sent a letter to the Tata Institute for Fundamental Research, conveying the President's sanction for a new biology research centre in Bangalore. Hence, NCBS turning 25 in 2016. But only upon looking back does the letter appear as a bookend to what really was a decade-plus process in realizing a National Centre for Biological Sciences (NCBS). More on that here: http://stories.archives.ncbs.res.in/exhibit/13ways/
** Yes, yes, we know blue moons aren’t that uncommon. But it’s a fun phrase. And yes, we fact-checked this with Sandeep. He confesses to his general state of invisibility. We all have something to learn from Sandeep.
Did you just scroll to the end of this long email without reading? We got you:
Session 1: Campus rituals and blue moons
Friday, May 27 2022. 5:30 PM - 7:00 PM
Lecture Hall - 1 (Haapus), NCBS
Open to all.