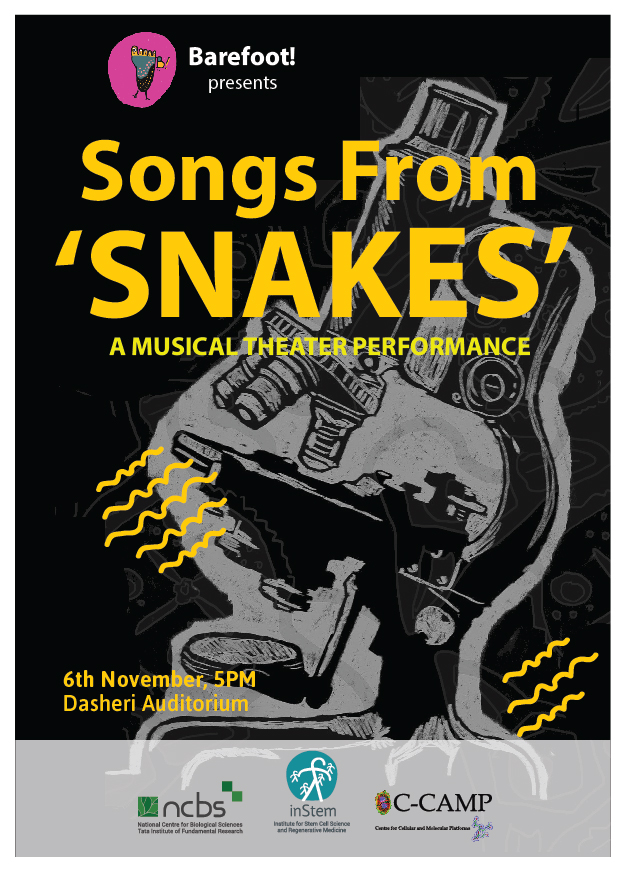 Entry Free, Open For all!

“It is my view that the earth is most noble and wonderful,
seeing the great number and variety of changes and generations
which incessantly take place on it.”

THREE HEARINGS ON THE EXISTENCE OF SNAKES IN THE HUMAN BLOODSTREAM

Three Hearings on the Existence of Snakes in the Human Bloodstream is an interactive, thought-provoking and entertaining theatrical production designed to elicit the spirit of questioning from audiences. An adaptation of the science-fiction story by James Alan Gardner, it is a fantastical historical account of how ‘otherness’ is manufactured, and how differences between human beings are wilfully magnified, preserved and even worshipped. The audience’s questions become a part of the performance, as do the actors’ own reflections and associations.

This story of the human race in a parallel universe not so very different from our own paints a sweeping historical canvas that allows us to view clearly the causal links that constitute a relentless march towards a desolate wasteland.

In Songs from Snakes, we present the songs and music from the original production, while attempting to give a gist of the story. Audience questions remain one of the most important parts of the experience.

THE STORY IN BRIEF:

In the first Hearing, The State vs. Anton Leeuwenhoek (circa 1400 AD), Anton Leeuwenhoek is accused of heresy when he claims, in opposition to what scriptures suggest, that there are “no snakes in human blood” although it soon becomes evident that this is simply a matter of chance. Four centuries later, a societal chasm based on this chance occurrence leads to the creation of two opposing religious sects.

In the second Hearing, The Royal Court vs. Mr. Charles Darwin (circa 1800 AD), Mr. Darwin is accused of grievance against public sentiment when he claims that the presence or lack of ‘serpentine analogues’ in human blood is not a matter of faith or religious affiliation but simply a result of evolution.  He warns that divisions may grow so rabid that opposing blood types may develop into different species of humans.

In the last Hearing, The McCarthy Committee vs. Dr. Natasha Patel (circa 2200 AD), Dr. Patel is accused of anti-nationalism for developing a drug that saves the lives of mothers and their newborn infants when parents are of different blood types, now associated with the two opposing religious cults. She is given the choice of developing the drug further in order to use it for the complete annihilation of the opposing sect/nation, or to watch helplessly as the reverse takes place.