Archives at NCBS : Events - Archives Public Lecture Series: Ornamented Elephants, the Lowly Pida, and the Turbaned Man -- Ruminations from the margins of design 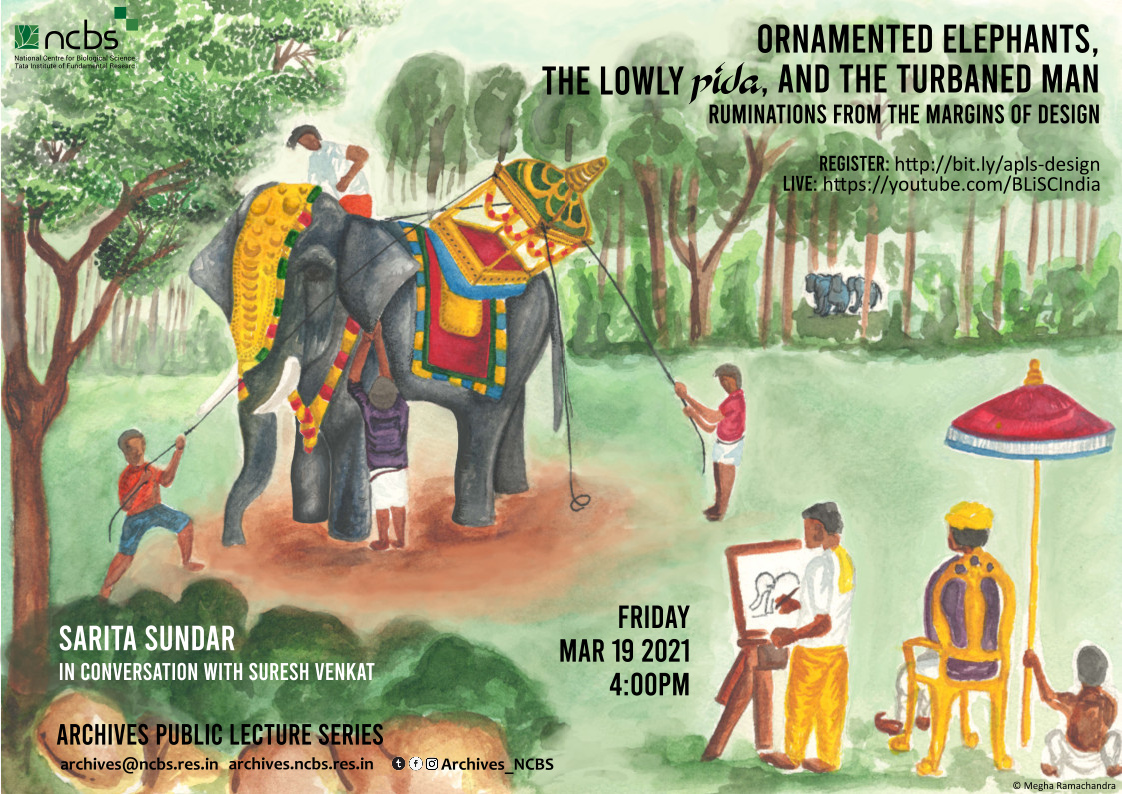 Abstract:
Hand in hand with the heady arrival of European Modernism in India in the mid-20th century, came minimalism. Both these movements shook and questioned an existing cultural inclination across various parts of the sub-continent toward ornamentation, embellishment and flourish. The singularity of thought and expression that is the hallmark of Modernism stands in virtual opposition to the binaries of expression manifest in Indian ways of representation. And yet, Modernism did enter the Indian landscape, most prominently through a state-sponsored drive post-Independence. And it held sway in diverse, visual expressions; in architecture, art, and design.
In this conversation, Sarita Sundar speaks of the consonance in the ‘playful ambiguities’ in Indian thought and aesthetic theory across the creative arts; its representations in popular and visual culture that can be found in design, folk performances, as well as political arenas. She speaks of her research in three distinct arenas: Indian typography traditions, village festivals in Kerala, and seating cultures across India. Sarita Sundar asks quite simply, whether freedom from ornament is a sign of spiritual strength; whether, for all its utopian ideals, Modernism is indeed in crisis, and if the announcement of its death was premature?
Bio:
Sarita Sundar’s practice and research spans heritage studies, popular and visual culture, and design theory. At Hanno, her heritage interpretation and design consultancy, she combines 30+ years of working with brand strategy and design solutions with her academic training in museum studies. Over the years, she has engaged in critical enquiries into how culture engages with the visual, ranging from research into Indian vernacular typography (Indians don’t like White Space, 2015) to studies of intangible culture in performance practices (The Goddess and her Lieutenant: object systems at a village festival, 2016). Her present research focuses on seating cultures in India, in collaboration with The Godrej Archives, Mumbai.
Suresh Venkat is an editorial consultant, anchor and actor. Suresh is a seasoned media professional with over 20 years of experience in lifestyle and business media. Previously, Suresh has worked with CNBC TV18, Star TV and Titan Watches. He is currently part of the ensemble cast of the theatre productions of Twelve Angry Jurors and A Few Good Men. Suresh is an alumnus of the National Institute of Design, Ahmedabad.