Archives at the National Centre for Biological Sciences
Public Lecture Series | SPECIAL EDITION
https://www.ncbs.res.in/events/apls
33rd edition
Monthly talks framed around explorations in and around archives. Discussions by artists, archivists, historians, teachers, journalists, scientists and others.
Tue, Jan 19 2021
4:00 PM – Public lecture by Janaki Nair
Discussant: Indira Chowdhury
5:00 PM – Launch of the Obaid Siddiqi Chair, Archives at NCBS
Mariam Ram (TNQ Technologies), S Ramakrishnan (Director, TIFR), Satyajit Mayor (Centre Director, NCBS)
Register: https://bit.ly/APLS-impossible-archives
Live Stream: https://youtube.com/BLiSCIndia
**
The demands for a past and the (im)possibility of the archive
Janaki Nair
Abstract:
For some time now, professional historians have been under siege from a range of forces, which, ironically, have been enabled by the very operations of our democracy.  Professional historians have been facing the predicament of increasingly being defensive of the evidentiary protocols of positivist history despite our necessary skepticism about its explanatory ability. In part, this is in order to resist a precipitous decline into historical fantasy at the service of a strident neo-nationalism, with its renewed demand for a single, usable, teachable past.
These protocols are also being questioned, even discarded, by those whose lives have been denuded of a past, indeed humanity itself:  for them, the oral tradition and memory as encoded in myth, song, and performance may be their only access to a past.  The ‘demand for a past’ --  and in some cases the demand for a control of an ‘authentic’ past --  has therefore radically destabilized the historian’s  superstitious esteem of  the archives. Finally, there has equally been growing clamour for specific community histories, arising from assertive castes, ethnicities and regions in a complex democracy such as ours.
What is the historical method appropriate to our times, when ‘discontinuity’, even chaos, is our lot? What are the chances of the professional historian asserting the need for a historical temper, one that will allow the discussion and knowledge of India’s contentious pasts, while adopting ‘the flexible rigour of the conjectural paradigm’ as the historian, Carlo Ginzberg, put it, even as we assert that  ‘chronology, pure and simple’ is ‘one of the ‘historian’s most powerful weapons’? How will the shape of archives be transformed by these challenges?
I attempt to answer this question, first by recounting the controversies over the NCERT textbook in 2012, and then by discussing briefly the career of Tipu Sultan in the historical imagination, as a way of opening the space for a dialogue on the archives, and indeed the possibility of ‘new universals’ in the 21st century.
Bio:
Janaki Nair taught history at the Centre for Studies in Historical Studies, JNU, until her retirement in 2020. Her published work includes Mysore Modern: Rethinking the Region under Princely Rule (Minnesota University Press and Orient Blackswan, 2011/2012) and The Promise of the Metropolis: Bangalore’s Twentieth Century (OUP, 2005).
Indira Chowdhury is Founder-Director of the Centre for Public History at the Srishti Institute of Art, Design, and Technology, Bengaluru. She is also the founder of Archival Resources for Contemporary History (ARCH), Bengaluru, now known as ARCH@Srishti. She has set up numerous archives, including the TIFR Archives, and curated several archival exhibitions at TIFR including Partners in Science: JRD Tata and TIFR in 2005 and Homi Bhabha: The Cambridge Connection in 2007. Indira is a founding member of the Oral History Association of India, and served as its President from 2013-2016. 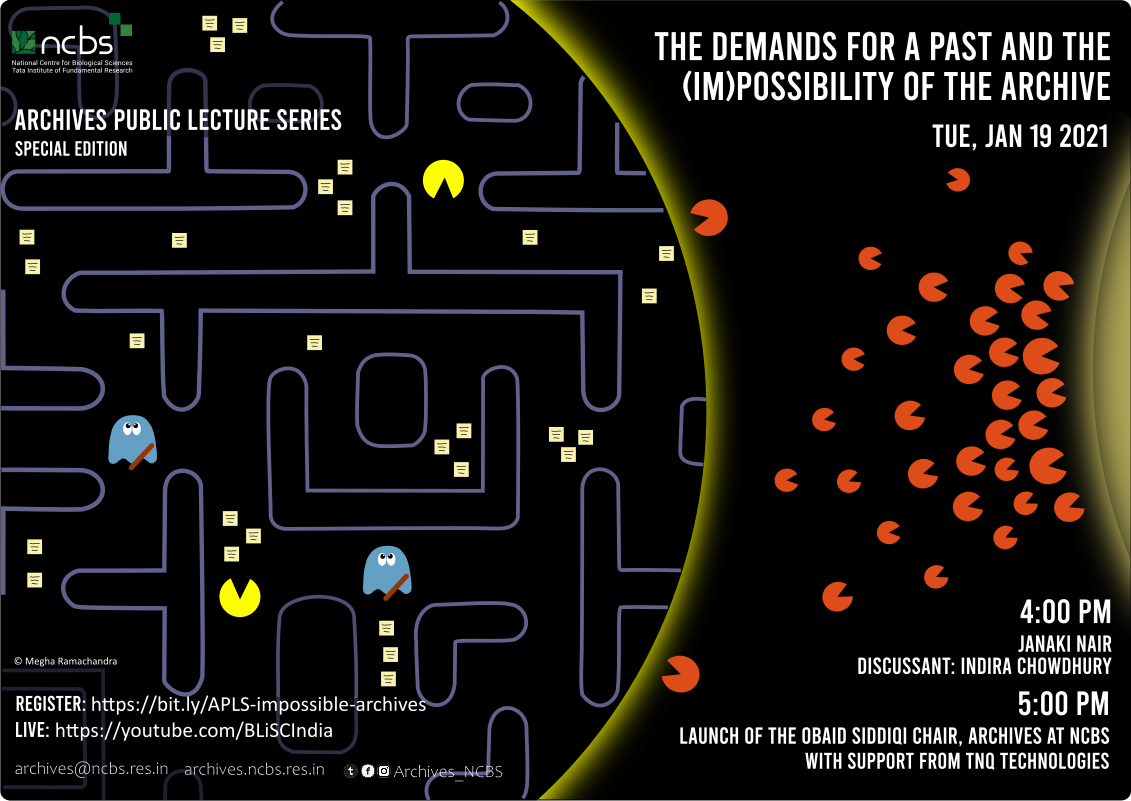