Archives at NCBS : Events - Archives Public Lecture Series: Beyond Defence: The Right To Imagine. I Never Ask For It

Archives at the National Centre for Biological Sciences
Public Lecture Series
https://www.ncbs.res.in/events/apls
26th edition
Monthly talks framed around explorations in and around archives. Discussions by artists, archivists, historians, teachers, journalists, scientists and others.
Beyond Defence: The Right To Imagine.
I Never Ask For It
Jasmeen Patheja and the Blank Noise Team (http://www.blanknoise.org/)
Abhaya Tatvarti, Eeshita Kapadiya,  Insiya Poonawala
Friday, June 19 2020. 4:00pm.
Register: https://tinyurl.com/APLS-20200619
Live Stream: https://youtube.com/BLiSCIndia
Abstract:
Sexual violence across spaces, geographies, identities and time has been justified through the systemic use of blame. Victim blame silences survivors of sexual violence and perpetuates the cycle of violence. Where and how are narratives of negotiating silence and speech contained?
Blank Noise was started in 2003, in response to the normalisation surrounding street harassment. It is a growing community of Action Sheroes, Heroes, Theyroes; citizens and persons, taking agency to end sexual and gender based violence. Action Sheroes confront fear narratives, victim blame and attitudes surrounding sexual assault. They assert the right to live free from fear and defenceless, claiming the words ‘I Never Ask For It’.  Action Sheroes fiercely protect their right to imagine the city, place, identity or world they desire. They leap towards collective action, co-creating the ideal.
Through projects and interventions designed at Blank Noise, the talk journeys through the everyday negotiations of the individual, woman, person in addressing sexual violence. It builds on the Action Sheroes, the artists, and activists’ right to imagine in climates that demands everyday resistance. The talk will also include a performative piece by members of the Blank Noise community to share herstorical/ historical context of ‘everyday resistance’. The talk reflects on the intersection of memory and resistance. The right to imagine is resistance.
Bio:
Jasmeen Patheja is an artist in public service. She builds ideas for public action committed to ending violence against women, girls and all persons. She is the founder, facilitator of Blank Noise, a growing community of Action Sheroes, Heroes, Theyroes; citizens and persons, taking agency to end sexual and gender based violence.
Patheja mobilises communities to build testimonials of sexual violence, confront fear narratives, arrest victim blame. Her practice rests on the power of collaborations and community.
Patheja is interested in empathy, building care capacity, vulnerability, defencelessness as a right, and the right to imagination. Select projects include “I Never Ask For It” and “Meet To Sleep” (ongoing).
In 2019, Patheja received the prestigious Visible Award; awarded for socially engaged art practice. She was recently awarded the Jane Lombard Fellowship by the Vera List Center For Art and Politics at The New School, New York. BBC listed her as one of the 12 artists changing the world in 2019. In 2015, she received the International Award For Public Art, towards the project Talk To Me (Blank Noise). Patheja is a TED speaker. She is also a TED and Ashoka Fellow. Recent exhibits include I Never Ask For It / Meet To Sleep at the Ford Foundation Gallery, New York.  Patheja is artist in residence at Srishti Institute of Art Design and Technology.
Patheja also collaborates with her grandmother, Indri (Inderjit Kaur) on a series of photo performances. 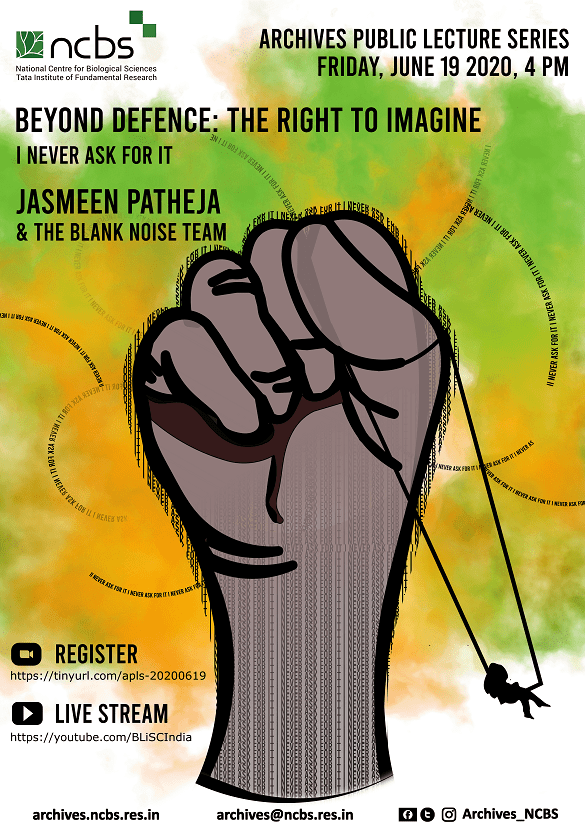