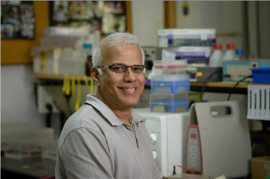 Moved to University of California at Irvine.

Roles of serotonin in the mammalian nervous system

Neurotransmitters play a critical role in neural function and interestingly enough in early development. In the latter case they often play a role in non-neural development too. Serotonin (5-HT), a major neurotransmitter has been reported to affect early development in both invertebrates and vertebrates, though this is not much appreciated. We have spent the last few years trying to understand the role of a specific serotonin receptor subtype i.e. the 5-HT2A receptor and its interaction with agonists, partial agonists and antagonists. In addition, we have been looking at serotonin and the role of this receptor in embryos and in stem cell populations. We have explored the interactions of dopamine, which acts as a partial agonist on the rat and human 5-HT2A receptors. The interactions of dopamine on the 5-HT2A receptor seem to be different from full agonists, such as serotonin, and antagonists, namely antipsychotics. We have identified conditions where dopamine activates the receptor at concentrations that are also known to be physiological. This adds another dimension both to our understanding of the role if this receptor as well as the role played by dopamine in psychiatric disorders. We have also extended our studies to look at the role of 5-HT and 5-HT2A receptors in processes not often related directly to neural function and identified the presence of serotonin in preimplantation mammalian embryos. Serotonin is distributed in a punctate manner within early embryos and is localized to the mitochondria. Addition of 5-HT to embryos alters the mitochondrial potential which has an important role to play in embryonic development. Similarly, lack of serotonin has been reported to effect mouse embryonic development. In our analysis if the receptor we observe functional 5-HT2A receptors in embryonic stem cells as well as in neural stem cells. These receptors when blocked affect differentiation and seem to play a role in cell-substrate interactions, an aspect not previously studied. Our studies suggest newer roles for serotonin and its receptors and in areas previously unexplored.