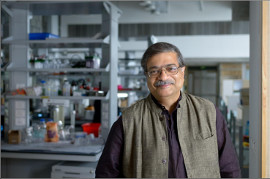 Memories come in many different flavors, some more potent than others. Emotionally significant experiences tend to be well remembered, and the amygdala has a pivotal role in this process. But the rapid and efficient encoding of emotional memories can become maladaptive — severe stress often turns them into a source of chronic anxiety. What are the cellular mechanisms underlying these powerful emotional symptoms? To answer this question, we have been using a range of behavioral, morphometric, in vitro and in vivo electrophysiological tools to identify neural correlates of stress-induced modulation of amygdala structure and function — from cellular and synaptic mechanisms to their behavioural consequences in rodents. Our findings point to unique features of stress-induced plasticity in the amygdala, which are in striking contrast to those seen in the hippocampus and cortex (1), and could have long-term consequences for pathological fear and anxiety exhibited in people with affective disorders.

In addition to behavioral experience, the genes we inherit can also cause cognitive and emotional dysfunction. Strikingly, individuals afflicted with certain types of autism spectrum disorder often exhibit impaired cognitive function alongside high anxiety and mood lability. Hence, we are extending our analyses to genetically engineered mice to identify cellular and molecular targets that can be used to correct symptoms of Fragile X Syndrome, the leading genetic cause of autism.

Brief overview of some of our current research projects:

One of the most powerful model systems for elucidating the neural basis of learning is Pavlovian fear conditioning, in which subjects rapidly learn to associate a previously neutral tone (CS, conditioned stimulus) with a coincident aversive stimulus (US, unconditioned stimulus), e.g. a footshock. Re-exposure to the CS alone elicits a conditioned response —“freezing”, which provides a measure for the learned association. The early stages of fear memory formation involve strengthening of sensory afferents from the thalamus to the lateral amygdala (LA). As useful as this simple behavioral model has been in studying basic cellular mechanisms of associative learning, it does not capture some of the essential features of learning in the “real world”, where learned associations are rarely invariant over time and need to be generalized appropriately to novel settings. There are costs associated with both too little and too much generalization. Understanding these processes is also critical for gaining insights into affective disorders such as post-traumatic stress disorder (PTSD), which may be viewed as an instance of overgeneralization.

Hence, we use in vivo unit recordings in awake, behaving rats to examine the neuronal encoding of fear generalization. Rats, chronically implanted with a microdrive containing multiple movable electrode bundles, were trained to associate one of two conditioned stimuli in a differential fear conditioning paradigm with either a weak or strong US. Single isolated neurons were classified based on their changes in differential responses to CS+ (paired with US) and CS- (not paired with US), following learning. Rats were first conditioned with weak US, and then reconditioned 24 h later with strong US. After weak-US conditioning, rats exhibited significantly higher freezing to CS+ than CS-. Correspondingly, a significantly greater proportion of recorded tone responsive LA cells showed cue-specificity by showing enhanced response to CS+, while a smaller number failed to discriminate between CS+ and CS-. In contrast, after strong-US, a much larger proportion of cells failed to discriminate between CS+ over CS-. Thus, a more aversive US elicited a significant shift towards cells showing loss in cue-specificity. Strikingly, same neurons that were initially able to differentiate CS+ from CS-, failed to do so after re-conditioning with higher US. This shift was paralleled by greater fear generalization at the behavioral level. These neural mechanisms may provide insights into the transition of emotional states from normal fear to pathological anxiety exhibited in stress disorders. Hence, we are extending these studies to evaluate the impact of acute stress on this model of fear generalization.

2 Delayed impact of a single episode of stress: implications for PTSD

PTSD is triggered by a single overwhelmingly traumatic, often life-threatening, event. Some components of the fear response in PTSD persist well beyond the original event. However, most animal models of PTSD focus largely on the immediate effects of repeated stress. Further, a majority of earlier studies have examined the impact of chronic stress on the hippocampus, and not on the amygdala, which is implicated in key emotional symptoms of stress-related psychiatric disorders. Hence, in this study we are trying to capture some of the defining temporal features of PTSD by building upon our earlier findings in a model of acute immobilization stress (AIS) that caused higher anxiety and formation of dendritic spines in the amygdala not one, but ten days later. Using whole-cell recordings from principal neurons in LA slices, we find that AIS reduces the frequency of miniature GABAergic inhibitory postsynaptic currents (mIPSCs) only 10 days, but not 1 day, after AIS. Further, treatment with the anxiolytic diazepam before AIS prevents the delayed reduction in GABA inhibition, spine increase, and enhanced anxiety 10 days after AIS. Since diazepam acts through enhancing inhibitory tone, we hypothesized that an initial reduction in inhibitory tone by acute stress may contribute to its eventual delayed impact on anxiety and synaptic inhibition in the LA. We confirm this prediction by showing that mIPSC-frequency is also lowered immediately after AIS. Taken together, our findings provide a new animal model for studying synaptic mechanisms in the amygdala that may underlie key affective symptoms of PTSD.

3 From animal models to therapeutic strategies

We are making use of the above acute stress model to further examine its relevance to, as well as treatment against, PTSD in humans. As mentioned earlier, treatment with the anxiolytic diazepam before acute stress prevents reduction in synaptic inhibition, spinogenesis, and enhanced anxiety 10 days after acute stress. Strikingly, diazepam given after acute stress also reverses the decrease in synaptic inhibition 10 days later. This is also paralleled by prevention of a delayed increase in fear generalization in animals treated with diazepam after AIS, thereby further implicating the reduction in amygdalar GABA inhibition in both anxiety and fear generalization. One of the most counterintuitive features of PTSD comes from clinical reports showing that cortisol treatment reduces the cardinal symptoms of PTSD. We have subjected our rodent model of PTSD to the challenge of replicating these clinical findings. First, in a series of hormone depletion and replacement studies using adrenalectomized rats, we find that corticosterone indeed prevents stress-induced increase in anxiety. Second, an excess of corticosterone provided in the drinking water before AIS completely blocked the delayed increase in anxiety. Further, in both of these experiments, corticosterone prevents stress-induced spinogenesis in the amygdala, thereby confirming the correlation between stress-induced spinogenesis in the amygdala and high anxiety.

4 Cellular & behavioral correlates of antidepressant action in the amygdala

Because depressive symptoms are often precipitated by some form of stress, animal models of stress have been used extensively to investigate cellular mechanisms of depression. Despite being implicated in the emotional symptoms of depression, the amygdala has received little attention compared to the hippocampus in past studies of antidepressant action. Further, these investigations have not taken into account the contrasting effects of chronic stress on the hippocampus versus amygdala. If an antidepressant is to be equally effective in countering the differential effects of stress on both brain areas, then it is faced with the challenge of eliciting contrasting effects in these two structures. We tested this prediction by examining the impact of tianeptine, an antidepressant with proven clinical efficacy, on neurons in the LA and hippocampal area CA1. Tianeptine reduces NMDA-receptor mediated synaptic currents, without affecting AMPA currents, in LA neurons. To probe the functional consequences of these results, we tested if tianeptine is capable of countering stress effects in the intact animal. Indeed, tianeptine prevents two major metrics of stress-induced plasticity in the amygdala - dendritic growth and enhanced anxiety-like behavior. We are now analyzing the impact of both acute and chronic antidepressant treatment on the amygdala using behavioral, electrophysiological and molecular assays. Taken together, our findings add to a growing body of evidence on cellular mechanisms in the amygdala that are different from those in the hippocampus, not only with respect to their response to stress, but also to potential therapeutic interventions against stress.

We have previously shown that an aversive experience like chronic stress strengthens fear memories, cause dendritic growth and formation of new dendritic spines, and enhances LTP in the amygdala. Paradoxically, similar effects are seen in the hippocampus and cortex, not as a result of stress, but after a positive experience like environmental enrichment (EE) consisting of increased exercise, social interactions and exposure to objects that encourage exploration. This raises an intriguing question – how would the amygdala respond to EE? If EE elicits cellular changes in the amygdala similar to the hippocampus, then our earlier results predict EE to cause enhanced anxiety and fear learning. But one expects positive experiences to reduce, not increase, fear and anxiety. On the other hand, if EE does reduce fear and anxiety, would it induce cellular changes in the amygdala that are different from the hippocampus? Indeed, we find that EE decreases amygdala-dependent auditory fear conditioning, as well as anxiety. But, EE does not affect spine density in the LA. In contrast, the same EE enhances hippocampal spine density and contextual fear conditioning. Consistent with these behavioral and morphological changes, whole-cell recordings in hippocampal slices show EE to enhance LTP and mEPSC frequency. In striking contrast, EE elicits a reduction in mEPSC frequency, along with smaller magnitude of LTP in the LA. Thus, plasticity elicited by a positive experience also appears to be different in the amygdala.

Fragile X syndrome (FXS), a common inherited form of mental impairment and autism, is caused by transcriptional silencing of the fragile X mental retardation 1 (FMR1) gene. Earlier studies have identified a role for aberrant synaptic plasticity mediated by the group I metabotropic receptors (mGluRs) in FXS. However, many of these observations are derived primarily from studies in the hippocampus. The strong emotional symptoms of FXS, on the other hand, are likely to involve the amygdala. Unfortunately, little is known about how exactly FXS affects synaptic function in the amygdala. Using whole-cell recordings in brain slices from adult FMR1 knockout (KO) mice, we find mGluR-dependent long-term potentiation (LTP) to be impaired at thalamic inputs to principal neurons in the LA. Consistent with this LTP deficit, surface expression of AMPA-receptors in the LA is reduced in the LA of KO mice. Further, in contrast to the hippocampus, thalamic inputs to LA neurons also show reduced transmitter release probability, manifested by a reduction in mEPSC frequency. Importantly, pharmacological inactivation of mGluR5 with MPEP failed to rescue either the deficit in LTP or surface AMPARs. However, the same acute treatment with MPEP reversed the pre-synaptic deficit. Therefore, despite the contrasting manifestations of abnormal synaptic transmission and plasticity in the amygdala versus hippocampus, our results suggest that synaptic defects in the amygdala of KO mice are still amenable to pharmacological interventions against mGluR5, albeit in a manner not envisioned in the original framework of the mGluR theory. Of particular therapeutic significance is the possibility that such reversal can be achieved pharmacologically even after the disease has had months to leave its mark in the adult brain.